Back in 2017, I shared my attempts to get back into running after many years, specifically referencing the “Freshman 15” and other corpulent milestones. Since then, I’ve done a fairly good job of keeping up the runs and avoiding salty snacks in front of the TV in my normal day-to-day life. Or at least, I did, until March 13, 2020. As many of us in the USA recall, that was the day ‘normal’ changed.

END_OF_DOCUMENT_TOKEN_TO_BE_REPLACED

If you’ve been reading this blog for some time, you may have noticed that my trips:

Of course, this could also all just be me and my flair for the overly dramatic.

END_OF_DOCUMENT_TOKEN_TO_BE_REPLACED

Daniel is traveling tonight on a plane…I can see the red tail lights heading for Spain.  Jane says, “I’m going away to Spain when I get some money saved.”  I’ve never been to Spain, but I kinda like the music.

You now know pretty much all ArchivistPhil knew of Spain prior to a week-long trip I just took to that nation. Yup, three little pop songs referring to a country with roots going back as far as 35,000 years. Who says archivists can’t be uncultured boors?

END_OF_DOCUMENT_TOKEN_TO_BE_REPLACED

At 4:30 AM, on the morning of January 3rd, I swung my tired legs over the edge of my bed, dragged myself onto my feet, struggled into the sweats and sneakers I’d laid out the previous evening, forced a caffeinated pre-workout drink down my throat and stumbled out my door into the quiet chilly darkness. END_OF_DOCUMENT_TOKEN_TO_BE_REPLACED

You know, you live with someone long enough, you think you know them pretty well.  My wife and I just celebrated our 25th anniversary, so I thought I had her down cold: loves birdwatching, cooking, 80s music and terrible television shows (more or less in that order, which is fortunate for me, as I prefer classic films).  She’s intellectually curious, especially about the animal kingdom, the environment and outer space.  In fact, she has mentioned on occasion that she would have loved to have been an astronaut. While I do not share her enthusiasm for space travel (unless we’re watching Stanley Kubrick’s 2001: A Space Odyssey) I will say I secretly chuckled at her claim; it was difficult to imagine her rocketing around the galaxy, since she’s timid about riding any bicycle but one of the stationary variety. END_OF_DOCUMENT_TOKEN_TO_BE_REPLACED

Made it! Not without a few scraped tires, some nail-biting and white knuckles, but still…

Surprise, surprise! We managed to arrive in Monterey for phase two of our west coast sojourn with car, luggage and three bodies intact. Our next five days consisted of slightly nervous car travel, fur-free hiking (with the exception of my sweatpants, which retain trace amounts of Leonberger after several launderings), birding (a-ha!) and picture taking. Lots and LOTs of picture taking. END_OF_DOCUMENT_TOKEN_TO_BE_REPLACED 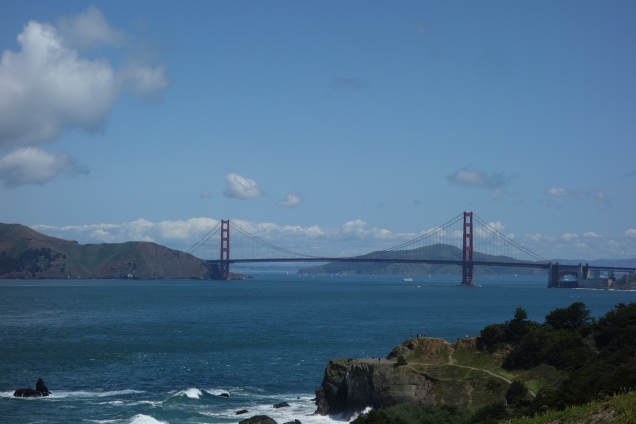 There are so many places I’d love to visit, but only so much time and money available. So, on a recent winter night, when a friend began discussing her upcoming business trip to San Francisco with my wife, I thought little of it. We LOVE San Francisco, but had already been there (twice). If we were going to repeat trips we owed family a visit in Florida. So I was a bit surprised when, fueled by several glasses of Pinot Noir and Cabernet Sauvignon (oh, did I mention they were discussing this at a wine tasting?) my wife and friend announced we were meeting up in San Francisco in April. END_OF_DOCUMENT_TOKEN_TO_BE_REPLACED

As The Doors once lamented in song, “Summer’s Almost Gone.”  Rather than sit around and sulk about oncoming cold weather (I hear we have another snow-heavy season ahead in the Northeast), I decided to squeeze every last bit of enjoyment out of what warm sunshine remains in 2015. And what better way to do that than to lace up a good pair of walking shoes, and hit my favorite trail? END_OF_DOCUMENT_TOKEN_TO_BE_REPLACED

On June 29th, 2015, the staff of Touro College Libraries met at our lovely Kings Highway campus in Brooklyn for our Summer 2015 departmental meeting. Over 40 information professionals from more than a dozen sites located in New York City, upstate and Long Island gathered to share the latest developments in our efforts to provide the best possible services to the Touro community. END_OF_DOCUMENT_TOKEN_TO_BE_REPLACED 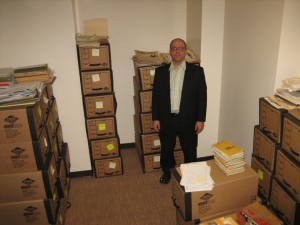 Getting started in the Archives, with over 60 very large cartons…and a stack of steno pads, seen at lower right in the foreground.

When I first began organizing the papers of Touro College founder Rabbi Dr. Bernard Lander, I was faced with a variety of documents and information, in an array of formats spanning several decades. Not surprisingly for an institution which started in the 1970s, much of the early history was on paper – photocopies, typewritten originals and handwritten, or longhand notes.