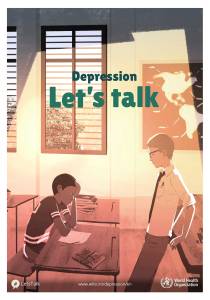 World Health Day has been celebrated every year since 1950 and is held in the beginning of April to coincide with the WHO’s founding. It is seen as an opportunity to draw worldwide attention to a major health topic each year. Past event themes include diabetes, food safety, and healthy blood pressure. The World Health Day theme for 2017 is depression. Depression is a mental disorder that affects people of all ages and all backgrounds, all over the world. It can impede one’s ability to carry out even the simplest everyday tasks. It can affect a person’s level of functioning at work, school, or home. At worst, depression can lead to self-inflicted injury or suicide. New estimates from the WHO approximate that the number of people living with depression increased by 18% between 2005 and 2015. Hopefully, a better understanding of depression will help reduce the stigma associated with mental illnesses and lead to more people seeking treatment.

Although there are known treatments, fewer than 10% of those affected by depression receive help. Barriers to effective care include a lack of resources, poorly trained healthcare providers, and social stigma associated with mental illness.

If you’d like to learn more about depression, you can search the library’s catalog for books and articles at www.tourolib.org.

You can also connect with the World Health Organization’s campaign or learn more about campaign activities on their website, http://who.int/campaigns/world-health-day/2017/en/.