At 4:30 AM, on the morning of January 3rd, I swung my tired legs over the edge of my bed, dragged myself onto my feet, struggled into the sweats and sneakers I’d laid out the previous evening, forced a caffeinated pre-workout drink down my throat and stumbled out my door into the quiet chilly darkness.

Sound dramatic?  The truth is, this is nothing new for me; I’ve been doing it three times per week ever since a gym opened two blocks from my home, more than two years ago.  I’ve also been a habitual exerciser ever since 1985, when I first noticed the dreaded “freshman 15” making their presence known.  And my early morning ritual, with its gentle zen bell alarm clock and cutting edge fruit-punch flavored powdered drink mixes (loaded with creatine, vegan protein, and BCAAs!) is not so impressive, compared to the real hard-core old school athletes out there.

But you’d be forgiven if you thought I was just one of countless people who begin each year with good intentions and fresh enthusiasm for improved health and fitness.  Sadly, many people do not keep their resolutions and before you know it, another year has come and gone.  While I have always managed to keep active, certain sports certainly come more easily to me.  So my New Years’ resolutions typically involve setting higher goals in the sports I am comfortable with, or trying something new.

It came from the 80s… Thankfully, as a poor college student, I couldn’t afford track suits when I started running. (Image: Retrowaste.com)

This year, I am actually trying something old (for me).  I primarily lift weights and ride a bicycle for exercise.  But back in 1985, it all started for me with the simplest exercise of all: running.  I actually remember my first run very well.  After hemming and hawing about trying jogging (quite the hot trend in the 1980s), I finally laced on a pair of low-tech canvas sneakers while watching “Live AID” on the telly and ran up to a school field near my parents’ house.  I probably only completed a half mile that first day, and I recall all too vividly the sensation that disintegration of my shins was imminent.  But I survived, and over the next few years, gradually became a runner (albeit a very very slow one).  My non-exercising friends all laughed at my new ‘hobby,’ so I began training with co-workers.  I signed up for some 5K races (just over three miles), then a few 10Ks and finally a half-marathon. 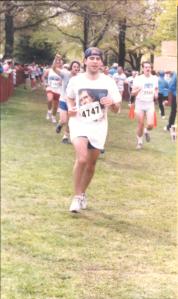 The (much younger) author, about to post a fairly respectable 2:02:31 half-marathon PR.  Was I really ever that skinny?

My next goal was a full 26-mile+ marathon, but it was not to be.  Continuing education and other life matters got in the way.  Hectic schedules meant no time for workouts, and meals began to regularly consist of trips to the candy vending machine or fast food drive-through window.  The 15 freshmen soon returned, then ballooned to 40. 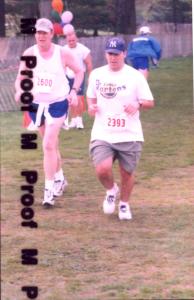 Eventually I discovered cycling, first as a practical means of commuting, then a recreational activity and finally a serious fitness obsession.  To balance out the upper body which remains idle on bike rides, I began weightlifting.  To help with mobility and mental focus, I have made forays into yoga and stretching.  As for running, I’ve tried many times over the past few decades to rekindle my love for locomotion, but could never quite re-establish the jogging habit. Until now.

Those old bike jerseys come in handy for cold weather runs.  The author jogs ‘around the world’ at a race in Queens’ Flushing Meadows Corona Park last December.

I’m not completely sure how it happened, but I think I’ve finally gotten my running groove back.  Perhaps I was inspired by other TCL staff who run, including T&ES cataloger Leiba Rimler and TC Israel librarian Aviva Adler.  Or maybe I was tired of hearing my doctor telling me cycling and weightlifting were doing nothing to get rid of the freshman 50. 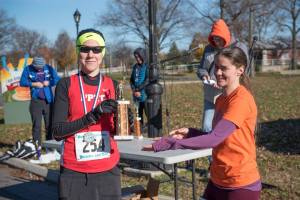 Touro College Libraries’ cataloger Leiba Rimler not only ran around the world in Queens, she also won the women’s division. 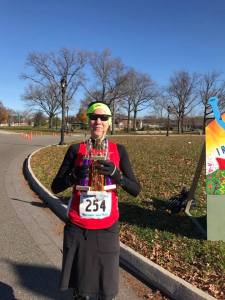 But if I’m gonna be honest, I have to say I probably owe my running relapse to the world of archives.  Runners, like most athletes, like to see progress.  The best way to track improvement is by recording workouts, thus preserving one’s performance and general impressions from day-to-day.  So, when I decided to really try and get running again last fall, I did three things:

Pretty much every running expert, coach and professional competitor recommends keeping a log.  In addition to tracking progress, logs can help you train for a goal, experiment with new equipment and techniques, prevent injuries and provide inspiration.  Some famous runners, such as Englishman Ron Hill, who has run every single day since December 20, 1964, have built an enviable library of beautifully bound running diaries, filled with impressive data from championship events and record-setting feats.

My own logs are nowhere near as historically notable and certainly nothing special to look at – they’re simple paperback diaries, wrinkled and yellowed with age, containing hastily scrawled thoughts fresh after a humble amateur’s workouts.  But their value to me was immeasurable; as I read through my entries, so many memories came rushing back.  The names of friends who’d huffed and puffed alongside me.  Runs that took place during happy times in my life (meeting my wife, graduating from school) and sad times (the death of loved ones).  Triumphant races (I’ve never ‘won’ a single race, but every time a runner posts a PR is a win of sorts), and disappointing runs where I came up short.  Joyful days, like the time a friend and I, not sufficiently prepared for a half marathon, lined up at the very back of the starting group, walked the first four miles and then jogged the remaining distance as slowly as possible, singing horrendously off-key the entire way.  And dark days filled with pulled muscles, creaky knees and worry over family illnesses or friends’ misfortunes. 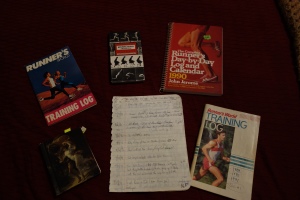 They may not look like much, but these humble little journals took me on a trip back through time.

Another half-marathon.  No PR was posted that day, but my friend and I did manage to destroy every song we could think of in 9 miles of running.

For the past five years or so, I’ve recorded my cycling and weightlifting on a web app.  Being an archivist, I was thrilled when it occurred to me that I could manually input my runs from the 1980s journals into this app, to create a continuous online record of my fitness efforts, for better or worse.  I don’t keep a separate running log with pen and paper anymore, but I do still jot down impressions about my workouts in my daily planner, which helps remind me to check my smart phone calendar.  What else would you expect from a library school graduate? 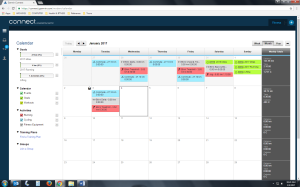 While my middle-aged legs may not have a full marathon left in them, I’ve already completed a 5k and 4-mile race, with a 5-miler, 10k and 15k, followed by my old nemesis, the half marathon coming up over the next five months.  I know that reviewing my old logs has helped me in reaching these goals.  I wish you all the best of luck on your New Year’s Resolutions.  With a little patience, some hard work, and a good workout diary, you may be surprised what you can accomplish.

3 thoughts on “Turning Over an Old Leaf”