There are so many places I’d love to visit, but only so much time and money available. So, on a recent winter night, when a friend began discussing her upcoming business trip to San Francisco with my wife, I thought little of it. We LOVE San Francisco, but had already been there (twice). If we were going to repeat trips we owed family a visit in Florida. So I was a bit surprised when, fueled by several glasses of Pinot Noir and Cabernet Sauvignon (oh, did I mention they were discussing this at a wine tasting?) my wife and friend announced we were meeting up in San Francisco in April.

Of course, I could have said “no.” There were several places off the top of my head that I’ve never been to (Vancouver, Switzerland, wine tastings that don’t end up with crazy plans). But in the end their enthusiasm won me over. After all, one of my oldest friends lives and has a restaurant there, and I hadn’t seen him in almost ten years. A quick call confirmed my wife and I could stay with him and his assortment of animals on the first leg of our trip. So it began. 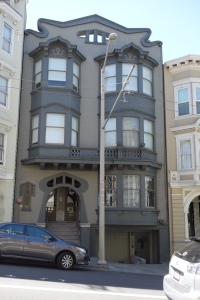 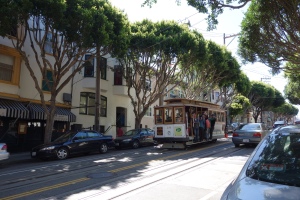 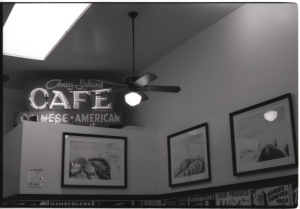 Inside my friend’s restaurant – which, incidentally, was long the only kosher-style deli of its kind in San Francisco. 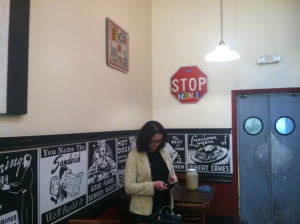 Mrs. ArchivistPhil, no doubt checking on the migration status of double-crested cormorants.

On previous visits, we’d spent time in the city and hiking through majestic redwoods in nearby Marin County. This time, my travel companions had cooked up a second-half getaway to Monterey, Carmel and Big Sur, about two hours south of San Francisco. My wife, an avid birdwatcher, had been there before and lured us with tales of beautiful beaches and peaceful hikes. While I recognized a bird-watching trip in disguise (nice try, Mrs. ArchivistPhil!), I played along, and was rewarded with a very relaxing and enjoyable journey. 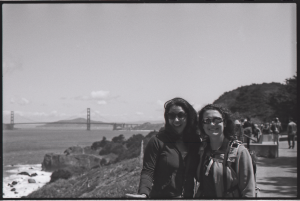 Mental note, for future reference: Keep these two away from the wine!!

ArchivistPhil: “What a view, huh?”

Mrs. ArchivistPhil: “Say! Is that a WESTERN GREBE?”

Phase one began with a five-day stay at my friend’s spacious home one hour north of the city. In addition to egg-laying chickens and head-butting goats in his backyard, we got plenty of critter love in the form of a large black lab and two even larger Leonbergers. Never heard of a Leonberger? Imagine a dog you could hop on and ride (through a brick wall), or attach a yoke to and pull a few buildings down (should that need arise). Luckily they are as friendly as they are huge, as I spent the better part of phase one buried under 275 pounds of fur, treated to the world’s most thorough tag-team tongue baths.

Bert was a handsome fella. 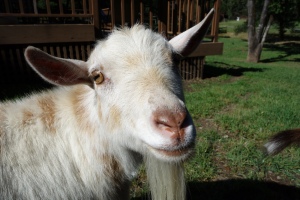 And little Blossom was so sweet! 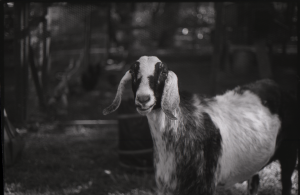 But Bug? This big guy was the bad boy (my head still hurts).

Gracie is a pretty big black lab. But if you wanna see a BIG dog… 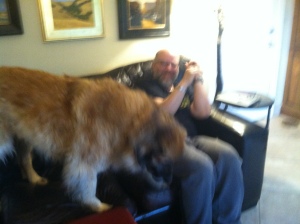 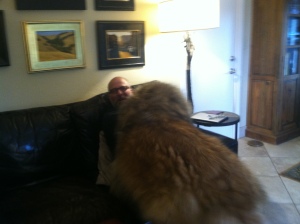 Btw, the author IS in these photos.

My host suggested I set aside one set of clothes for house wear due to the proliferation of clingy fleecy dog hair, so I soon found myself living 24/7 in the same furry sweatpants and dampened t-shirts I’d originally packed to sleep and hike in. Thus set the sartorial tone of my trip – more Oscar Madison than Felix Unger.

An early highlight came on our last night during phase one: a stop at Bourbon and Branch, one of a growing number of revisioned speakeasies. Sauntering over to the Tenderloin district, one knocks and gives a secret password at a nondescript door on a dingy, dirty street corner – and is ushered into a clean, cozy cavern with soothing music and minimal lighting by a young woman impeccably dressed in flapper finery. Ruing the fact that I was wearing sweatpants and Leonberger saliva rather than a dapper pinstriped suit and snazzy fedora, I doffed my fur-covered baseball cap as elegantly as possible and stumbled into the darkest bar in the world. When my eyes finally adjusted we squished into a sliver of a booth and enjoyed a few very cozy, delicious and potent cocktails. A friend secured bragging rights for the evening by purchasing a $99 tumbler of 23-year-old bourbon. He was kind enough to let me sample it and Jorum of skee; it actually put hair on my chest! Oh, wait – that was just more Leonberger fur. 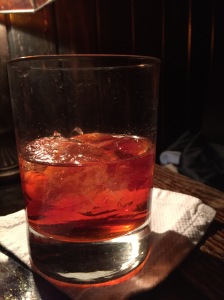 Some of our drinks cost much less than $99. But all were delicious, and looked the bee’s knees in the prohibition-era lighting. (image: Jarryd Tribble)

A trip to the restroom is difficult enough with A. minimal lighting B. potent cocktails and C. fuzzy sweatpants, let alone D. all of the above. Making things more fun – while waiting on line, and leaning in the wrong places – various bookcases and walls revealed themselves to be portals to other speakeasy universes, including one called ‘The Library’ which intrigued me, for obvious reasons. Also one for which we did not, alas, possess the proper password, resulting in a mere fleeting glimpse of flappers and fedoras, followed by the only time in my memory that a wall has ever been slammed in my face. I made a mental note to one day return to this library, with A. the password B. a flashlight C. a suit and fedora and D. a lint brush.

Inspired by our trip back to the roaring twenties, we picked up some retro hattitude in a North Beach milliner shop.

The next morning, after saying goodbye to my CA friend and one last headbutt at the goat pen, we took the BART back to the airport to meet our NYC friend, who’d wrapped up her business and was renting us a car. The introductory weather for phase two was textbook San Francisco – misty rain and pea soup fog. Which made things that much more exciting when our friend took the wheel and swung nervously out into the wrong lane towards oncoming traffic (oh, did I mention she just got her driver’s license?). Somehow we managed to redirect the car down the coast along Highway 1.  This part of the trip proved I have much steadier nerves than my wife; I rode shotgun and cheerfully gave all sorts of expert veteran driving tips while Mrs. AP cowered in the back seat, hiding behind a thick Sibley guidebook and offering faintly whispered phrases of prayer each time we approached an intersection or hairpin curve.

No, this image was NOT photoshopped. Bye, Rodger!

Would you ride in a rented car with this woman?

Will your faithful blogger and his companions survive this Pacific coast cliffhanger? Check back here in one week to find the answer…