This Kos Eliyahu belonged to my father’s uncle, Robert Ludwig Adler. He was imprisoned during WWII in Camp de Gurs, in southwest France, before being deported to Auschwitz, where he perished.

My own father was born in Karlsruhe and fled Germany at 15 in 1935. In 1994 he wrote me a letter telling a bit about Robert Ludwig Adler’s story. It reads:

“This cup belonged to Robert Ludwig Adler, son of Emmy and Samuel A. Adler, your great-grandparents.

Never married, Robert was a talented pianist. I don’t think he could read music – but he could go to the opera,

then come home and play the music from memory.  He worked with his father in the shoe wholesale company N.A. Adler.

I had never seen a Kos Eliyahu with a removable lid; I don’t know if this was a common design for such a cup. It’s quite large; it holds almost a whole bottle of wine, which is why I believe it is a Kos Eliyahu and not a Kiddush cup.

And I had never heard of Camp de Gurs, but my first year in Israel, I saw this book at Pomeranz, an English language bookstore in Jerusalem:  The Gurs Haggadah: Passover in Perdition, edited by Bella Gutterman and Naomi Morgenstern. 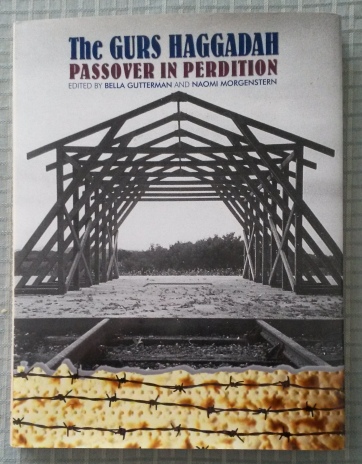 “The Gurs Detention Camp in southwestern France was the testing ground for thousands of Jews seeking to pit the inhumanity of war against their belief in God and themselves.  Here in 1941, the inmates decided to hold a Seder on Passover, the Holiday of Freedom, in order to declare their own freedom from the terror of oppression.

“On Passover, the rabbi, like Moses on Mt. Sinai, stood high upon a platform in the center of the camp.  His eloquent words reawakened that moment of national pride which the Vichy Government and the Nazis had sought to steal from them.  Suddenly, the stench of the camp dissipated, the misery around them faded, and the prisoners became a whole people again, a link in the unbroken chain of Jewish suffering and renewal.

“Replete with photographs, and featuring a facsimile of the actual Haggadah recreated from memory and used in the camp, THE GURS HAGGADAH sheds light on a little-known camp where, despite the stresses and sub-human conditions, the people enriched their own lives by organizing both religious and cultural activities.  It is a poignant tribute to the unwavering spirit of the Jewish people”

So this Kos Eliyahu belonged to my father’s uncle, who was at Camp de Gurs and present at the very Pesach seder memorialized in this book – his last celebration of life and (relative) freedom before his untimely death. It is only fitting that on this day we remember his story and so many countless others.

Touro College & University System will hold the event “Commemorating Yom Hashoah: A 70-Year Perspective” on Thursday April 16, 2015, from 5:00-7:00 p.m. at the Lander College for Women.

2 thoughts on “Family heirloom: In Memory of the Holocaust”