Getting started in the Archives, with over 60 very large cartons…and a stack of steno pads, seen at lower right in the foreground.

When I first began organizing the papers of Touro College founder Rabbi Dr. Bernard Lander, I was faced with a variety of documents and information, in an array of formats spanning several decades. Not surprisingly for an institution which started in the 1970s, much of the early history was on paper – photocopies, typewritten originals and handwritten, or longhand notes.

A Pre-Touro letter, written in longhand. Dated October 7th, 1946, it invites an already renowned Rabbi and rapidly rising young sociologist named Bernard Lander to give one of his typical “dynamic” presentations to the Detroit Women’s League of Young Israel.

In many cases, there were rather cryptic, tiny handwritten squiggles on Dr. Lander’s papers.  Written in margins, scrawled along the top or bottom of the page, squeezed between lines of text, and jammed into the corners. Or even entire pages of nothing but funny little squiggles. While I couldn’t make heads nor tails out of what they actually meant, being a late-stage baby boomer, I knew immediately that I was looking at shorthand.

Shorthand was originally developed by the Ancient Greeks, flourished in Rome and Imperial China, and had a resurgence in western Europe following the High Renaissance. Essentially a method of abbreviation, shorthand was useful when it became necessary to take notes quickly and became a standard tool for secretaries and others needing to record the thoughts of leaders and dignitaries. Journalists, court recorders and similar occupations which benefited from speedy note taking in fast-moving situations also employed shorthand, or “stenography.”

Job seekers in Cicero’s Ancient Rome could do worse than bone up on the “Tironian Notes” system of shorthand and add it to their Curriculum Vitae. (Image retrieved from Wikipedia, March 2014.)

As it turned out, the shorthand seen in Touro’s archival records was always expressed in the relatively modern Gregg method, was executed in a remarkably fine and graceful style, and curiously, began appearing suddenly around the mid-1980s. Which, coincidentally, was the same time period a certain Mrs. Ruth Schneider arrived on the scene at Touro College.

“Ms. Ruth,” as she was pictured in the 1986 Touro College Yearbook, shortly after joining the Touro Family.

Ruth came on board in 1984 (October 22nd, to be exact, as she is quick to point out) and went on to serve as Dr. Lander’s executive assistant for over a quarter century. One of the skills she brought to Touro was her stenography, which she had learned in high school. Because the Touro College and University System Archives contain decades of papers that Ruth oversaw, she was a natural choice to eventually transfer there as an assistant, which she did in 2011. 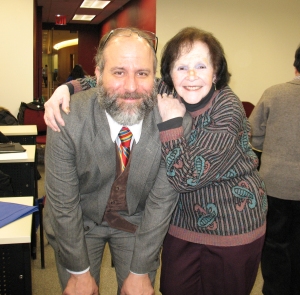 Ruth’s arrival at the Archives presented an opportunity to finally unlock the secrets contained within a carton full of steno pads loaded with squiggles- I mean, shorthand. Ruth rolled up her sleeves and set to work on deciphering those pads, surprised and delighted to see fond reminders of her many years working alongside Touro’s founder and first President.

After her transcriptions were complete, a fascinating real-time image emerged, showing not only the words that Dr. Lander dictated, but also a glimpse into his thought process.  In addition to his reputation as a fine public speaker, Dr. Lander was also known for composing elegant letters, filled with humor, compassion, wisdom and brimming with thoughts from the sharp mind of a true intellectual visionary. 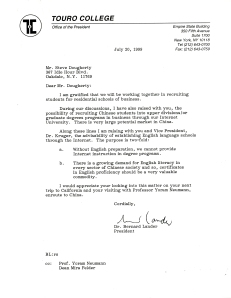 Believe it or not, this is indeed the actual end product of the squiggles above! Witnessing the creation of ground-breaking innovations in higher education was merely a daily on-the-job occurrence for Ruth while working alongside Dr. Lander.

Today, more than ever, these steno pads clearly are more than mere squiggles. If the final letters which were typed and signed on Touro stationary were the end user’s interface, Ruth’s shorthand was the back end – the raw programmer’s code which (in the technology of its day) provides real-time revision records. You can almost hear Dr. Lander dictating his correspondence…lines that were spoken, then reconsidered, struck out, and carefully rephrased. Because a major part of archival preservation is concerned with capturing the creative process of historic records, these steno pads and their transcriptions are true standouts among Dr. Lander’s papers in the Touro Archives.

All images provided by and property of the Touro College and University System Archives, unless otherwise noted.

One thought on “The TCL Time Machine: The Long and Short of it”